Today I played in the Junior Open at Tidworth I played well, I was 2 under handicap (78-10=68). The greens were rolling very nice but were very very slow. I came second in my division and I won nearest the pin on 13 hitting it to exactly 6ft 6 inches. I won a TaylorMade Aeroburner 3 wood and a glove for the nearest the pin. Overall great day!
Posted by ET at 20:59

3 Clubs and a putter

Today I played in 3 clubs and a putter, I played OK considering I only had 3 clubs and a putter. I shot and 81 which is 1 over handicap, 35 points. I came second and won myself £15! Callum won with 42 points! what a bandit! Thank you to Dennis Fuller for sponsoring the event and Mike Head for buying us all a drink :D
Posted by ET at 21:13

In August 2011 played in a non handicap competition at Broome Manor golf club and won! my prize was a nine hole playing lesson with David Howell. I never got that lesson...until now!

My dad and I woke up at 6:00 for a 1 hour drive to Swindon, we arrived and I warmed up on the range. I played OK I didn't any birdies but made a few pars. I asked David some questions and just generally talked, David is a very nice guy and has had a successful year on tour so far! After the round we took some photos and he gave me some advice on my swing. He noticed I was coming too much in to out and I was hooking the ball, (which is a good thing for Charlie!) he gave me a drill which allowed my arms to stay more connected with my body. He also said I take my hands too far away from my body so I need to think there is an electric fence in the way, and then through impact I need to feel like the top of the club is pulling to the left. Overall great experience, thank you to David Howell for giving up his time to play with me.

Random fact: I won 4 years ago! 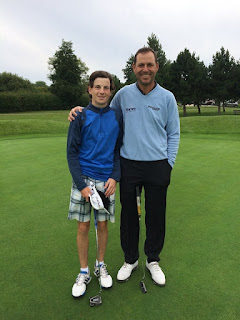 Playing lesson with Charlie and Dad at The Berkshire

Today I played at the Berkshire with Charlie and my Dad. I didn't play very well but still came away with two birdies and some valuable advice. On the course I tend to get annoyed with bad shots, as do most golfers however if I am to be a good golfer (which I will) I need to find the positives and stay level headed. The task Charlie set me was to find a poker face because as he rightfully explained when he was playing you would not be able to tell whether he was playing well or playing bad as he did not show that with facial expressions. This is what I need to be able to do. Overall nice round of golf.

Random stat: I shot 79 the other day and only had 31 putts, just goes to show my driver is causing me problems (3 off the tee on the 4th).

4th Eclectic card and A round with the lads!

Today I played a round with some friends. I practiced 2 hours before and then played. I played very well on the front nine shooting 36 which is one over gross and 4 under handicap, however, on the back nine I played terrible and was 9 over par! I ended up playing level with my handicap. Overall good day.

Yesterday and today I played with some good friends of mine I shot 79 and 77, 1 under and 3 under. I also practiced before hand for 4 hours. Overall fun day I just need to do that in competition.
Posted by ET at 19:42